Last Friday, one of the local news stations featured a segment about speeders in vehicles destroying the quality of life in the neighborhood.  The story focused on the stretch of Carmel Ave. pictured above and highlighted by the red rectangle.  A few portions of the segment drew my attention.

1) Emergency Access Creating Emergencies: The neighborhood has requested speed bumps but apparently they can not put in speed bumps because Carmel Ave. is an emergency access route.  The irony here: this provision creates conditions which will inevitably necessitate more 911 calls.  When someone is hit at 40 miles per hour, their chance of survival stands at 5%.  If they are hit at 20 miles per hour, their chance of survival is 85% (source).  How fast do you think people are driving down this street?  Installing speed bumps would increase emergency response time by a few seconds.  Installing speed bumps or some other traffic calming would also increase quality of life and walkability, reduce speeds and create a better neighborhood.  It would appear that our priorities as a city are a bit off.

2) Neighborhood Streets as Highways: Looking at this street, both from the news segment video and from Google Maps, it’s too wide for its intended use.  There is enough space on this street for on-street parking and two way traffic.  On street parking is a great way to slow down driving speeds in neighborhoods.  However, there aren’t any houses fronting this streets.  This means that there are rarely vehicles parked on this street.  Therefore, the street feels to drivers like a desolate rural highway and the drivers treat it as such.

It seems that the neighborhood is in a pickle.  What can they do?

The short term answer: paint.  Though it’s not as good as building actual curb extension,  painting bulb-outs, displayed in the image below, can help to visually narrow the street, reducing speeds.  It also won’t impede emergency vehicle access.  Eventually, the neighborhood should campaign for physical infrastructure improvements.  Until then, paint could really help. 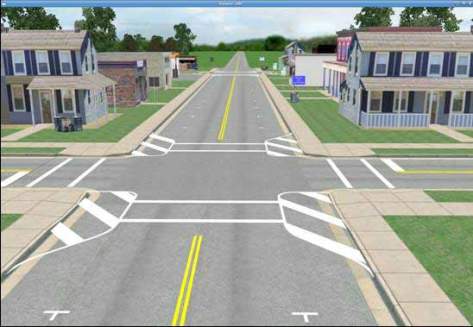