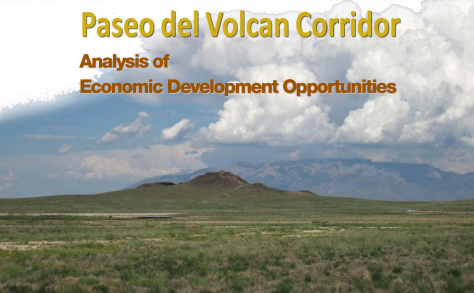 “Paseo del Volcan plan hailed as future of the west”

The headlines always sound so romantic, don’t they?

Though these are all real headlines from the Albuquerque Journal about real projects, they’re selling a myth. This is part of the discussion within the #NoNewRoads campaign by our friends over at Strong Towns—an education and advocacy nonprofit working to create resilient communities through better development models. #NoNewRoads strives to transform the national transportation conversation through a nontraditional campaign (emphasis ours):

This week at Strong Towns we are going to focus our attention on the embarrassing mess that is the American system of transportation finance. Our premise here at Strong Towns has been, for some time now, #NoNewRoads, a rejection of any proposal to spend more money on this system until we undertake dramatic reform.

That position puts us at odds with advocates on the left of our political spectrum as well as those on the right. So be it. The current political paradigm is bankrupting this country … . It’s time to create a new paradigm.

Click here to read more about the premise of #NoNewRoads

Everyone loves a ribbon cutting for a new road project, but maintaining the infrastructure once it has been built is not quite as fun or exciting. Our current financing system emphasizes new construction without accounting for long term maintenance costs.

New and widened roads are subject to an economic rule known as “induced demand.” It works like this:

New road space encourages more drivers to drive more often. In the meantime, lanes are expanded by sacrificing bike lane width, sidewalk width and, ultimately, quality of life on or around the road.

Don’t believe in induced demand? Click this link to read about the notorious Katy Highway in Houston. In summary, the Texas Department of Transportation recently finished widening the highway—and commute times in the corridor actually increased. The Katy Freeway is currently 23 lanes wide.

America has been shaped by transportation. Canals, railroads and highways have all shaped the cities and towns we live in today. The Federal-Aid Highway Act of 1956 allowed the government to begin paving new roads with the goal of creating a network of national highways. In 1992 the Interstate Highway System was declared complete. Since that prolific era of roadway development there has been little focus on the maintenance and care for these roads. We are now a nation of potholes. Almost 300 bridges in the state of New Mexico alone are rated “Structurally Deficient” and many more bridges do not meet current design standards. We have all experienced cracked pavement, potholes and unsafe roadway designs. However, we continue to develop new roads with the mentality that our transportation culture and travel preferences have not changed since 1956.

One important conclusion to all of this is that, contrary to popular belief, you can’t build your way out of traffic. Expanding a road will never “ease traffic,” at least not in the long run. It will only move the traffic down the road another few miles. It’s a system that leads to increasingly diminishing returns. Highway expansion isn’t fundamentally wrong but it is unethical to say that a highway expansion paid for with taxpayer dollars will ease traffic when the data says otherwise.

Where It’s Happening in ABQ

The best example of a massive new highway project in the Albuquerque metro area is Paseo del Volcan. This planned freeway is so notorious that it recently made a national list titled “12 of America’s Biggest Highway Boondoggles” (it’s #10).

If you look at the plan for Paseo del Volcan, linked here, and if you read the headlines from the beginning of this article, you would assume only positive can come of the project. From the city’s Paseo del Volcan website, emphasis ours:

“Paseo del Volcan is an essential long-range need for our region. Preparing for this road now will encourage good quality, well-planned development for the west side of the region in the future. This will open up the possibility of future employers and in turn address the jobs/housing imbalance and congestion. It’s time to move this project from the back burner to the front burner.”

Strong Towns has studied this exact question in a piece titled “The Cost of Auto Orientation”. We strongly encourage you to read the whole article but, in short, Strong Towns found that:

When the folks at Strong Towns say “auto oriented,” they are talking about places like big box stores and drive-thru restaurants, such as the abundance of new Starbucks or Chick-fil-A’s we’re seeing pop up all over Albuquerque. When they say “traditional commercial block,” they are talking about areas like Central Avenue from Downtown through Nob Hill. The word “outperforms” refers to tax revenue for the respective city or town where you find these developments.

An  important point is that  just because the local daily and the city use lofty language—e.g. “future,” “ease,” “essential,” “quality,” and “possibility”—to hype a project, that doesn’t necessarily mean the project in mind is the best possible solution to the given problems. All the studies about Paseo del Volcan are technically right: constructing and widening roads will always create temporary jobs and when the land around the road is developed, this creates tax revenue. However, it’s still a huge waste of resources.

Building new housing subdivisions around new roads in the desert is one way to develop a city but it is extremely inefficient. Beyond that, we never allocate enough resources to maintain all of our new roads. If we did, all that new sprawl out in the desert would never be “affordable.”

Across the country and the world, there is a growing understanding that building outward forever in a suburban, automobile dependent manner is eventually unworkable. At a certain point “drive till you qualify” is a three-hour commute in each direction.

Here in Albuquerque we continue to spread out across the desert. As we grow outwards our resources are spread thinner. Our ability to invest in maintaining infrastructure is diminished. Furthermore, our local economies are diluted. Instead of building vital, dense neighborhoods we have instead designed for suburban lifestyles. This is inherently unethical, as automobile dependency forces the young, the old, the poor and many others into a lifestyle of solitude or dependency.

Instead of feeding more growth, let’s improve what we have. Let’s build a high frequency transit network and fill the gaps in our bicycle network. That way, people from the ages of 8 to 80 can safely and easily move across the entire city.

Until this is the funding and financing priority, we advocate for building #NoNewRoads.