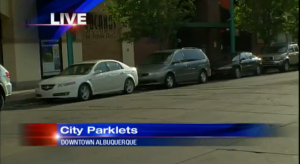 Channel Four News aired a segment last night about parklets. Tim Trujillo gracefully covered the subject in the video segment, explaining the social and economic benefits of having safe and pleasant places to hang out and spend time Downtown. Here’s a link to the full article and video.

In cities where parklets have already been built (such as NYC and San Francisco) local businesses were not initially supportive. Once businesses realized people spent more money in places where they could safely sit, demand for parklets and plazas increased. For example, in Times Square NYC, a large portion of Broadway Blvd. was converted into a plaza in 2009. Since that change occurred, retail sales and rent values have skyrocketed (Streetsblog NYC). All over America and the world, residents and planners are realizing that people are the key to successful places and spaces; cars are secondary. Soon, Albuquerque will join a group of great American cities that prioritizes space effectively and reallocates space from cars to people without much more than a signed piece of paper. Until that moment, we must all join together and tell our city what we want.

Albuquerque is NOT for cars; it is for us, people, Burqueños. We want to walk and bike and use all of the streets safely. Our city leaders understand this but they need to hear the message more forcefully. Other cities across the country are beginning to realize that endless low density sprawl is a recipe for economic disaster. A strong core is key to the success of a metro area and parklets are a step in the right direction.